Understanding a little bit about what we know of the brain and how it works is a necessary step for anyone interested in brain-computer interfaces, EEG, or biofeedback. This article is an overview of some basics that make brain functions discussed later in the series easier to grasp.
This is the second article in my Background on the Brain series. If you haven’t read it, you can find the first post, OpenBCI: Background on the Brain, for an overview.

What We Don’t Know

The brain remains to a large degree a mystery unto itself. Consider some of the things we don’t know about the brain: what consciousness is, for example. What’s the physical basis of subjective experience, cognition, and attention? These fundamental questions haven’t been answered! I recommend a look at Wikipedia’s list of Unsolved Problems in Neuroscience to keep what we don’t know in perspective. And I don’t know many things others do, so keep that in mind also.

Neurons, or nerve cells, are one of the most important types of cells in the brain. Neurons process and transmit information through electrical and chemical signals, and there are currently estimated to be ~86 billion of them in an average human brain. For comparison, that’s 13 times more neurons in your brain than there are humans on earth. 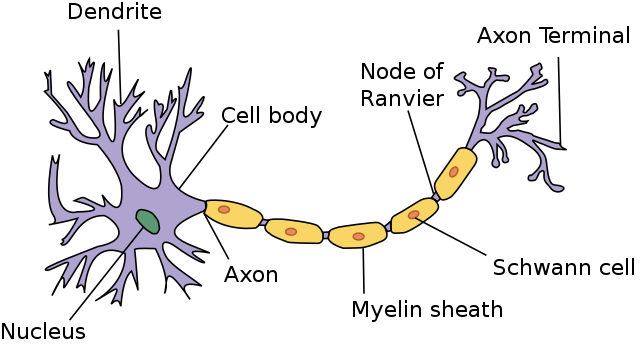 A rather approximate and unattractive diagram of a Neuron.

Neurons typically receive input though their dendrites (see diagram), process it in the cell body, and respond with electrochemical signals down their axon. Axons are also known of as nerve fibers, and the longest can reach a meter in length in humans — though most are far shorter.

A more detailed diagram of a motor neuron

Synapses allow a neuron to pass electrical or chemical signals to another cell. Synapses between neurons usually connect the axon of one to a dendrite of another, but there are also synapses that connect dendrites to dendrites, and axons to axons.

Chemical synapses have a small (~20nm) gap between the axon terminals of one cell and the dendrites of another called the synaptic cleft. The sending (‘pre-synaptic’) cell releases neurotransmitter molecules into this gap, which bind to receptors on the other (‘post-synaptic’) cell. Chemical synapses can release multiple types of neurotransmitters, which can be inhibitory or excitatory. Image of a mouse neuron, made with a laser microscope. Photo Credit: Tony Pham, Baylor College of Medicine

When a Neuron Fires

A neuron may have many inputs, usually from synapses connected to its dendrites, which it must evaluate. This occurs in the cell body, or soma: generally, if the excitatory inputs outweigh the inhibitory inputs (and are above a certain threshold) the neuron ‘fires’, sending a signal generated in the cell body down its axon. This “Action Potential” cascades along the axon, somewhat like a child’s line of falling dominoes.

Cells maintain a difference in voltage across their membranes, using specialized proteins to pump positively charged ions in and out of the cell. The inside of a cell has a charge of -70mv. The signal that travels down a neuron’s axon is electrochemical: an action potentials cause the polarity of the voltage difference across the nerve cell’s membrane to be temporarily reversed (see diagram), so that the inside of the cell has a positive charge. This signal moves fast, around 90 feet per second, but not nearly as fast as electricity traveling down a wire, which goes close to 186,000 miles per second.

Axons are very small, typically only 1–20µm (micrometers) wide, with lengths ranging from a few millimeters for many of the neurons in the brain, to up to a meter in length for the longest nerves, which connect the base of the spine to the toes.

There’s a protective shield around the run to keep anything from interfering with it once the dominoes start falling. Many axons are sheathed in layers of Myelin, an insulating material made of protein and fatty substances, which protects them and speeds up transmission.

The dominoes aren’t the end of the story. Like any good Rube Goldberg contraption, something cool happens at the finale. When the action potential gets to the end of the axon, it triggers a horde of small chemical-filled bubbles (called vesicles) to dump their payload of about 5000 special neurotransmitter molecules out the end of the neuron.

These float out into the “synaptic cleft”. Some reach the other side — usually receptor cells on the dendrites of another neuron — where they influence whether its domino chain is knocked over or not. ❧ 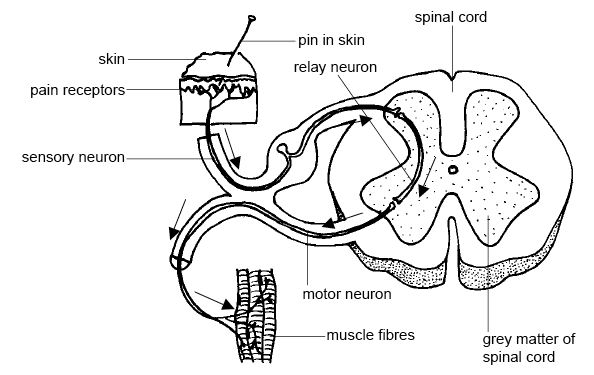 Neurons are present in the body as well. Though the brain has higher concentration of them, there are large numbers of neurons in the spine, and in other organs such as the heart and intestines. In the spine, Spinal Interneurons take input from sensory neurons and relay it directly to motor neurons without sending the signal to the brain first; that’s how reflexes can be so fast, and how you can move your hand away from something that’s burning you without thinking about it: you don’t think about it until afterwards, if at all.

Neural Networks are formed by the connections between large numbers of neurons. Large numbers of neurons firing (transmitting signals down their axon) at once can generate ‘brainwaves’ that can be measured by an Electroencephalograph. The fifth article of the series, Brainwave Frequency Bands, will further explore brainwaves and their origins.

Cerebrospinal fluid is produced at rate of about half a liter a day, and flushed 4 times per day to clean out metabolites and toxins. It’s produced in the brain by the ventricular system, a set of four interconnected cavities (ventricles). Within each ventricle is a network of cells that produce the bulk of the CSF: the Choroid Plexus. The ventricular system is connected with the central canal of the spinal cord by the third ventricle, allowing for the flow of CSF to circulate.

The lymph system is responsible for clearing waste generated in most of the body, among other things, but it doesn’t extend to the brain. In the brain, instead of the lymph fluid, it’s cerebrospinal fluid that carries metabolic toxins and waste from the brain into the bloodstream.

The brain’s dense, and it’s hard for the fluid to circulate and get the waste out. According to a TED talk by neuroscientist Jeffrey Iliff, sleep plays an important (and surprising) role in the process. During sleep, more space is made for cerebrospinal fluid to circulate, and CSF flow increases. Furthermore, Iliff said “we discovered … the brain cells themselves seem to shrink, opening up spaces in between them,” making room for the cerebrospinal fluid to be pumped through the brain — on the outside of the blood vessels — and transport the day’s ‘waste’ from inside the brain’s tissue to the bloodstream!

Another benefit of CSF: neutral buoyancy. While the brain’s mass is about 3.3 pounds, or 1500 grams, when suspended in cerebrospinal fluid the brain’s net weight is equivalent to a mass of 25 grams. Existing in neutral buoyancy means the heavy, soft brain doesn’t cut off its blood supply by its own weight, as it would if it was resting on the skull rather than being suspended in cerebrospinal fluid.

The Old and the New 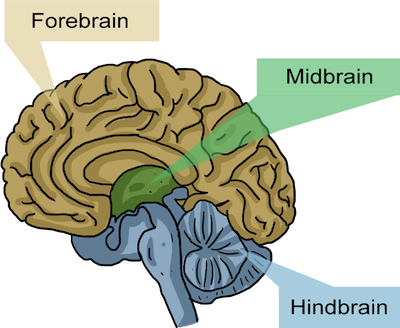 Image courtesy of Shmoop University
The brain can be considered as three sections divided by the type and complexity of their functions, with ‘higher-level’ processing farther from the brain stem. You can imagine the brain like a mushroom, where the hindbrain is the mushroom stem, with root into the spinal cord, the midbrain is the top of the stalk, and the forebrain surrounds the rest like a mushroom cap. It’s a primitive analogy, but gets the general idea of the three sections across.

Other ways of dividing the brain by regions and functions will be covered later in the series.

The medial longitudinal fissure — a deep groove running down the midline, front to back, of the brain — divides it into right and left hemispheres. The two hemispheres are connected by the corpus callosum, a wide band of neural fibers estimated to contain 200–250 million axons.

The two hemispheres are roughly mirror images of each other at the macroscopic level, with small differences, such a slight warping of the right side, bringing it just forward of the left side, called Yakovlevian torque. But the cellular composition of the cerebral cortex reveals that the types of cells, neurotransmitters, and receptors are can differ noticably between the hemispheres. Some of these differences are consistent across human beings — across species, even — but there are also observable differences from individual to individual.

My favorite source of highly scientific citations, Wikipedia, has an interesting observation about the generalizations made about the ‘right brain’ and the ‘left brain’:

Broad generalizations are often made in “pop” psychology about one side or the other having characteristic labels, such as "logical" for the left side or "creative" for the right. These labels are not supported by studies on lateralization, as lateralization does not add specialized usage from either hemisphere. Both hemispheres contribute to both kinds of processes, and experimental evidence provides little support for correlating the structural differences between the sides with such broadly-defined functional differences.

The extent of any modularity, or specialization of brain function by area, remains under investigation. If a specific region of the brain, or even an entire hemisphere, is injured or destroyed, its functions can sometimes be assumed by a neighboring region in the same hemisphere or the corresponding region in the other hemisphere, depending upon the area damaged and the patient's age. When injury interferes with pathways from one area to another, alternative (indirect) connections may develop to communicate information with detached areas, despite the inefficiencies.

But there is one thing about the hemispheres that “Pop” psychology has right: The left hemisphere of the brain controls the right half of the body, and vice versa.

I hope I’ve provided a useful overview of a few fundamentals of the brain, and that they’ll help provide a solid foundation for learning about the brain’s function on a macroscopic level. The next post will cover the terminology for location in the brain, and go over the regions of the cerrbral cortex and their functions, since the cerebral cortex generates much of the activity picked up by an Electroencephalograph such as the OpenBCI.

To hear when the next post is published (this one was somewhat delayed), you can subscribe to our RSS feed or follow me on Twitter. If I have omitted something, made an error, or you have a question feel free to reach out on twitter or by Email, or leave a comment below. Thanks for reading!